Some wishes for Viz

Some wishes:
Node categorization. Maybe several nodes in one like for example the fx node
More nodes: Line, Curve, Rectangle, Cellular etc.
Copy, Instance
A way of setting the triangulation angle/direction
Support for Thomthoms quads for easier/better UV texturing
Smoothing edges/normals
Images as input
Grouping of nodes for reuse and sharing. Would be good to be able to decide what controls are visible for simpler use.
Warning when connecting a infinite loop. (I crashed SketchUp when trying that)

That’s it for now.

Ok, thanks for the feedback

I wish you could create something for Sketchup, similar to what you’re doing with VIZ, that one could create (utelize and later amend / update as may be required) complex textures.

That shouldn’t be hard to implement. What kind of texture operations do you think would be useful?

I’m not sure how SketchUp implements textures or if what I have in mind is even possible. I was thinking that if textures could be generated it would help with the generation of textures instead of having to look for something that you require and then try to get it seamless…

It’s definitely possible to implement something like what you are requesting, SketchUp allows to edit the image textures associated with the materials.

Greetings.
Thank you for your plugin.

I wanted to ask, can you add nodes for the Offset and Follow Me functions?
It would be very useful, I would like to generate for example a foundation around the house.

Nodes with the parameter “Angle between normals” in Soften Edges.
Smoothing error when importing into the sketch makes me sad…

And, I very often have a critical error when trying to change the source geometry in sketchup. I tried to disable the import nodes, but still my changes cause the program to crash.
I’m happy with any advice how to avoid it.

Hey. Thank you very much for the update.
Very cool! And the main thing is now more stable.
I’m already developing my new tools for large projects =)
I have a few questions.

Thanks for the feedback!

Going from version 1.x to 2 involved a major rewrite of the code to allow us to add NURBS curves and surfaces, as well as more flexibility. For this reason, there are a few nodes still missing, but we are going to incrementally add them in the upcoming releases.

Please keep us updated with missing functionalities that might be needed.

Hi
I have a question.
How can I transfer the VIZ settings from one file to another SketchUp file.
I see the hotkey CTRL + E
But I do not see analogues of commands for import.

When you use Ctrl+E, the node is saved in Documents/VizPro/nodes. Then when you bring up the create node dialog (by pressing Spacebar) the saved node will be in the list of available nodes. Here is a more in depth explanation:
https://www.fluidinteractive.com/products/sketchup-extensions/viz/help/containers/

Thanks for the answer.
But this is the creation of a new node.
But I’m not talking about creating a new node. I know that they can be used to transfer from file to file. But it’s not convenient, you need to do too many steps.(You can package the selected container. Save.load in a new file and open the container, copy to a file) And this adds garbage to the list of nodes

If it is possible, add a load of stored nodes. It would be more simple and convenient.
Sometimes I feel the need for such a function.

Thanks for the suggestion, we’ll look into adding that functionality.

Hi, It’s my first contribution on this forum, so please correct me if I post this in the wrong toppic.

I’m currently testing the VIZ Pro plugin and ran into an issue i can’t get right.
If I export my geometry from VIZ to Sketchup with the ShellSink node (in this case a window frame), it creates a Sketchup component. I want to copy this component inside sketchup multiple times.

When I change the width and/or height of the window frame in the VIZ parameters it creates a new component in Sketchup with the addition of #1. It only updates the measurements in the originaly imported geometry. The copied versions remain untouched. Am I doing this wrong, or is this something to fix in a next installment?

If you copy the output of a ShellSink in SketchUp, the link with Viz is lost. What you can do is use the Move node in Viz to place the windows in the appropriate locations inside Viz and then export all windows at once using the Shell Sink node.

Tested out Viz Pro some over the new year. Nice work development team!

Even as a work-in-progress, Viz functions just as expected and already adds some value and utility to the SKP platform beyond what can be achieved with the task or operation oriented plugins traditionally available for SKP.

I am a 6 year Grasshopper for Rhino user, 3 year Solidworks user, 2 year Sketchup User, and have tried out Dynamo, for Revit. Viz Pro might not have the UI polish or exotic components built yet, but the core parametric functionality is very much there. Viz is more parametrically capable than Solidworks right now hands down. Viz has equal paramatric capability to Revit, whether using Dynamo or just building parameters into vanilla Conceptual Massing Components. While there is no competing with the 6 or 8 years of development time Grasshopper has had, Viz already has 70% of the core parametric functionality. Amazing. and its only in early Beta! Im going to have to buy this plugin for myself if not for work as well.

-analysis nodes for all major primitive geometry types (tangent frame, curvature degree, segment lengths, srf area, volume). Flexibility of input data types is always helpful here. T value, pt, uv are all invaluable in different modeling situations. Analysis for almost all primitives in Grasshopper take place in their own bespoke components in the analysis tab. Viz seems to be baking some of this information into the output of many of its primitives. For instance, line through multiple points in Viz outputs the line, but also tangent frames at the t-value for each point used to construct it. If this happened for all measurable parameters on all geometry primitive nodes, there might not actually be a need for an analysis tab as all of that information would be contextual. Whatever UI form it takes, some degree of geometry analysis is a must for calling the tool set complete.

-wider variety of ways to generate all primitives in Viz. For instance, vectors can currently only be defined by two end points. A vector primitive node that used pt, direction, and length would have a lot of utility. Right now Move requires a vector input, and creating a vector requires 2 end points; so using Move effectively requires 2 point inputs. If the translation is simple and only in one axis you can just create these end points by modifying the base point XYZ components, but if the translation is not orthogonal, you end up in a catch 22. The end points required to make a vector used to move an object in a non-orthogonal direction can only be derived from a vector or line that is already in hand. Another way to approach this would be to build the Move node to accept a broader variety of input data types. For instance, move could also be specified with just a base point, normal, and translation distance.

-Solving for interpolated geometry conditions is a significant challenge right now. Some modeling programs address indeterminate geometry with applied constraints; no matter how model entities flex, they still maintain constraints such as point/line/line intersection, line/point normal. This is how Solidworks operates. Grasshopper operates by giving you access to all of the metadata of the model primitives through the analysis tab, and allows users to build up these geometric relationships of its associative primitives off of those analysis tab metrics. Viz seems to be going the more bottom-up approach like Grasshopper. Critical functions to see here in the final Viz build would be Boolean tests for inclusion of points within all primitive types, point intersection output for line/line or line/surface, and line output from intersection of surface/surface. Things like that.

Imma stop there, but this is obviously a very exciting tool.

Matt, thanks for the awesome feedback!

We are currently working on many of the things you suggested, stay tuned for the next updates!

Greetings. I have a new question.
How can I find the intersection lines of two solidities?
I want to apply a chamfer only around the hole. 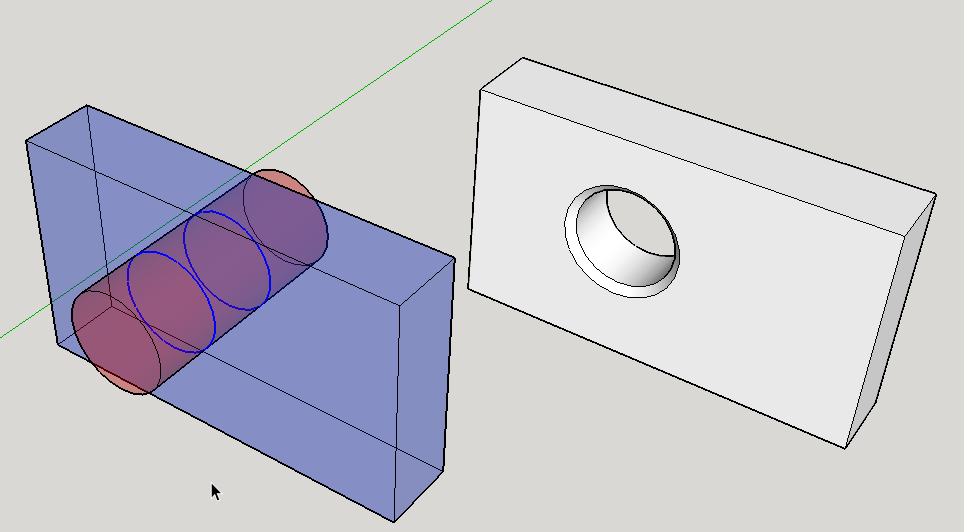