First of all, this is amazing. I’ve been using Maya MentalRay for far too long and so refreshingly simple to use, and affordable. My biggest question is about lights. IES integration is fantastic. But why no arrow manipulators to move the lights around? Or did I miss something?
Also, using sketchup 2016 and can’t seem to find the Fluidray plugin anywhere, even on the 2015 version. Thanks and keep it up the good work.

Oh, and here is a test render (plus some minor Photoshop compositing) 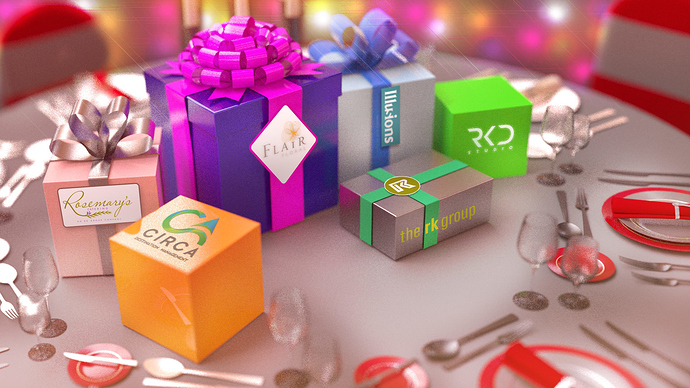 awesome and perfect for this time of the year; did you use the default FR glass? the glasses look a bit shaded. as for the IES manipulators I can’t reply, never tried yet

Yeah the default rough glass was used. I didn’t let it render too far in or it would of achieved a smoother finish, but that’s just because I was in a rush. By far the simplest and fastest render I’ve used so far! And the price point? Man, you can beat that!

I agree, very intuitive and versatile too; and one of the handiest graph editor ever seen. too many fireflies and noise anyway, there should be a couple of filters like in iray imo

Looks great. Is all the text done in PS?

The text, the cards the text are on, and the background bokeh. DOF was done with onboard camera though. Thanks guys!

Thanks, also about the DOF. I have to play with the camera more.

Support for SketchUp 2016 will be released in the next few days. Regarding the manipulators, does the mesh IES light have a transformation node applied to it?

Ahhhhh, not sure. Should it? Is it something I have to connect or does it already come connected? I’ll look into it.