Hey all, I’m just digging into VIZ. I’ve gotten a few boxes and cylinders in my model and I’m transforming them around to have a bit of fun…

I’ve noticed that when I take something like a cylinder that I draw in SketchUp, import it into VIZ, transform it and put it back in my model the radii get turned back into segments. I’m assuming this is intended behavior because it’s turning my cylinder into a BREP.

My real goal is to make parametric furniture in SketchUp so that I can CNC mill it out. Stuff like this: 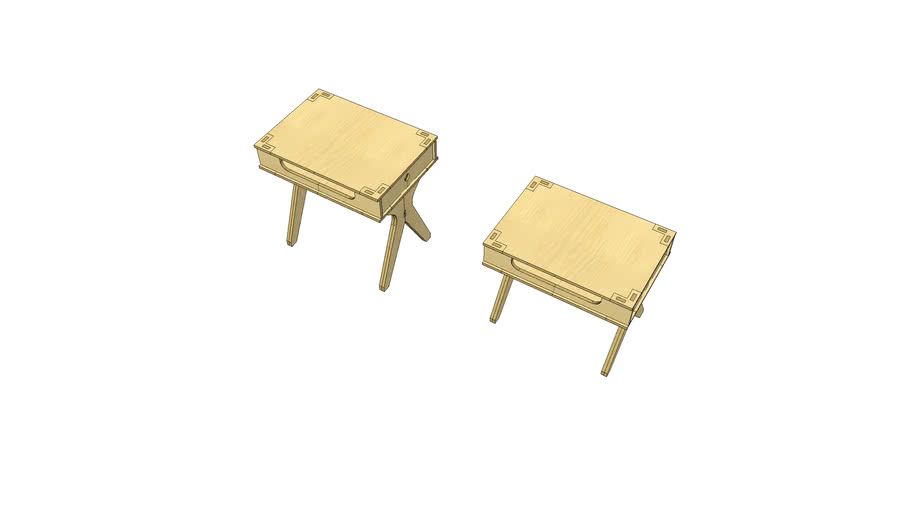 In this file you will find a vanilla version of the tall and short Maker Bench. Select the tops on these models to start hacking on. Create any kind of table you'd like. Just remember that your top needs to fit on the table when you're done....

What I’d like to be able to do is draw something like this Maker Bench, and then grab parts of it and do some move transforms on the existing geometry using VIZ.

If this is possible, I could take something like this bench and make it resizable without wrecking the arcs and circles that are in the model. Right now to do this I’m having to select each individual part of the geometry I want resize and having to move it one piece at a time…

Is this something that’s possible with VIZ or is that fundamentally not how it functions?

Hey Eric,
You are correct, that’s the intended behavior. Currently arcs in Sketchup are imported in Viz as a list of segments. Probably the best way would be to keep them as arcs, and then you’ll be able to do exactly what you are asking.

Is it possible with Viz to move groups of vectors and components that are already drawn in SketchUp? If I could do this I could build a parametric model in a way that would maintain the arcs and components the way I want to…

Yes, you can do the following:

Any chance you post a basic example? I have been trying and I cannot get it work… Granted I am pretty new…

I’m just scaling the legs, but you could easily add some logic to move the table top as well.

NOTE: this example requires Viz Pro >= 2.4.0, so make sure to have that installed before trying it

Thanks so much for doing that… I’m having a problem with that model that SketchUp immediately crashes when I try to open Viz with that model open. Any other model VIZ opens just fine…

Did you install the latest version of Viz?

Ahh, that worked. I had only installed it a few weeks ago so I didn’t realize there was an update already.

So your example did work here’s the thing I’m trying to figure out:

You made the table taller and shorter using scaling. As soon as you scale an arc in SketchUp it looses is radius value and reverts to segments. What I’d like to do is to be able to more bits of geometry, like this:

Is controlling specific bits of existing geometry possible with VIZ in this way?

If so, that means I could draw something as normal, and then create sliders and other controls to resize the objects as needed…

Just bumping this one up!

For what you want to do, it looks like you need to create a parametric model from scratch inside Viz.

Gotchya. The big question is can Viz output proper arcs in SketchUp? I know arcs are always represented as segmented curves, but if they contain a radius output “Entity Info” they can be exported as smooth arcs…

Currently arcs are converted to segments when exported to SketchUp, but we’ll add the possibility to export arcs as arcs in one of the next releases.

For me (and this use case) exporting arcs and circles is a must. I don’t care if they’re represented at segments in SketchUp, I just need clean arcs when you export.

If you make a SketchUp model with good arcs and circles (IE you just use native tools and don’t scale them) and then export a 3D cad model you’ll see what I’m on about. They come out perfect when you do it that way, not when you do a 2D export though.

It’s not very hard to implement, but it requires a few changes in the Viz internal communication with SketchUp. It sounds like something very good to have, we’ll see if we can squeeze the feature in one of the next releases.

That would be really awesome to see, and for this application, and many more I think it would be very useful.

Could you perhaps contact me directly? www.digitallyfabbed.com/contact (it’ll go right to me). I’d like to discuss this in a little more detail there.