It would be very usefull to add a node that adds a text with the area of the surface which is attached to and then to be able to do some simple math calculations in VIZ. This is great for urban planning, conceptual massing and programming stage as well as further in the process. Could be further use for material take-outs and quantities but for now a simple area tag would be great too !

Great! And if possible to develop the Text node so that it can be inserted on the SKP scene at user-defined locations. For example while i am manipulating the geometry i could see updating the area computations like Gross Floor Area, Net Floor Area, Density, etc.

What kind entity should it be in SketchUp, a texture?

Can it be a Text entity? The first one i am thinking is the Leader Text. That way it could stay attached to a point so it could indicate informations about specific geometry. The normal Text entity which is not attached to any geometry could also be an option for displaying some overall parameters of the whole model. So i think both of these type of text are usefull. 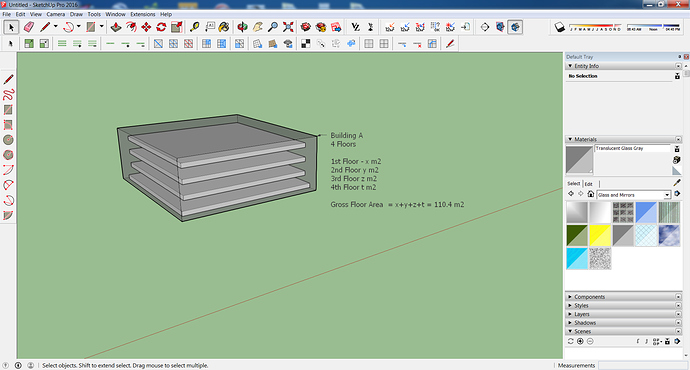 For example it could be an interactive tag but the words "Gross Floor Area, Floors, Building would be just custom text which is user defined. The numbers however could be parametric. For the number of floors it could count the number of components with the same name defined in the Entity info. To differentiate between each floor when they are unique it could take the Definition name of the entity. This way it could also count other user defined objects and components so it could create schedules. It could also do some length computation to calculate heights, perimeters, etc.
Maybe this tag should work when is attached to master component/group which contains all the other sub-components to be computed. So it could work backwards in the hierarchy analyzing what is inside.

Ok, thanks for the ideas. We’ll start by providing a node that outputs the content of an array into a leader text in SketchUp, then we’ll build more functionalities from there.

Thanks for the feedback! I think VIZ can push Sketchup to a new level and not just for the parametric 3d modelling but also for the information managing. I see there is already a node for Get Numeric Attributes from geometry maybe it could expand to that direction. However when i use the Geometry Source node, i cannot select components from the modeler. Is this going to be possible? In the Get Attributes node there are some options for point, vertex, primitive, element but i dont know how they work and i still cannot get components info. I think besides the Lead Text node, a node for viewing lists of data in VIZ will also be usefull.